This weeks post is a response to an article sent to me from the New York Times. The full text can be read here. The article is about Kickstarter, a unique online donation tool for visual artists, musicians, and other aspiring individuals of the arts.

Jenna Wortham, the author of the article explains how this organization works. Through the internet artists with a project idea post their concept. They are then matched with individuals who would like to make a contribution to the proposed project, but cannot fund the entire operation. By combining their resources these donors help get the projects off the ground. The contributors are then often treated to an additional tangible gift as well. Perry Chen, one of the founders, identified his organization as a sort of marketplace of goods and services based on the arts.

I think that this concept is interesting, and without further thought, I might be tempted to sign up for donation support. But I also foresee some potential problems. Any time you open your project idea up for funding from individuals, they are then going to gain a sense of ownership to that project or idea. Their vision may not be the same as that of the artist, and they may become unsatisfied with the outcome. This could lead to arguments among the artists as well as fellow donors.

Another problem relates to the idea of intellectual property. By posting an untested idea on the internet, which is available to anyone, there is a potential for someone who has funding to steal that idea and launch it as their own. There would be no real way to prove who came up with the initial idea.

These problems aside, I think this donation concept has merit. Too often it seems that Americans are uninterested in supporting the arts and cultural development. To see a group who is actively seeking and supporting artists is gratifying. To learn more about Kickstart, click here. I'll see you next week.
Posted by Klublog at 12:12 PM No comments:

This past week I sold a painting for the highest sum to-date for one of my works. This got me reflecting on the prices and values that society places on art works. My question is why are the prices so high? With most object-De-arts there is little use other than visual pleasure (or disgust). Life does not depend on these items. So why are they perceived as precious?

This is a thought that I have asked my art appreciation students to consider. In class, I taught that the value of a work depends on who the artist is, what his/her intention in making the art was, and what other viewers think about the work. In a broad sense this is true. These are the basic foundations for why critics and the public value a work, and why people would pay 6 million for a Van Gogh. But the real question of why or how these values are place on these objects isn't really answered. Would Van Goghs' sunflowers still fetch such a high price if it was instead painted by Joe Blow? I somehow doubt it.

This is a problem that I have thought about before, and I have no real answer. I don't know if I will ever completely understand this issue, but it is one that I think should be addressed. What are your thoughts? Post them in the comments, and we'll see you next week.
Posted by Klublog at 12:45 PM No comments:

Response to Artist Squatters on NPR 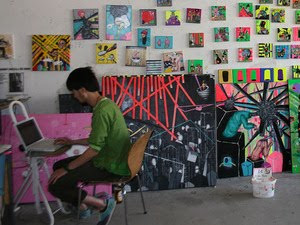 This weeks posting is a response to a radio broadcast on NPR. A link to the full broadcast can be found here. This news piece explained about a situation in Berlin involving a bombed out building from WW II that has been taken over by artists.

The story explains that upon the fall of the Berlin Wall in the late 1980's, a community of artists developed in what was once a large department store. This store had been heavily damaged by allied bombing at the end of WW II, and remained neglected throughout the Cold War due to its close proximity to the Berlin Wall. Eric Westervelt, the NPR reporter, explained how after the wall fell, artists moved in to the building and used it as a makeshift community to create and sell art. They have been doing this for the past 20 years. The reporter went on to describe how the buildings current owners now want to evict the artists and set up a new commercial tourist district on this site. The artists have banded together and are refusing to leave. It's become a legal issue and is set to go to court.

I found this piece interesting, but I do take issue with one thing that Westervelt said. He identified the artists as "squatters," however if you listen closely, the artists have always paid rent. It was a very low rent, but they have always paid their part. I don't necessarily think they could be labeled as squatters.

My second comment relates to something one of the artists interviewed said. Kuri Haran, an artist from Japan said that this was a unique place, but I'm not so sure it is. I know of several cities and towns in the United States that are trying to establish themselves as artist communities. These cities offer artists low interest loans to develop their studios and galleries in what are often historically important examples of American Architecture. The hope is that artists will move in, and bring a vibrant new life to communities that are struggling. As far as I know, these new artist communities have been met with some success. This is very similar to the community established by the artists in Berlin.

I'm not sure the artists should be removed from the building in Berlin. I think the established community of artists could work closely with the buildings owners to create a new environment to work and sell their art. Perhaps the art towns of the United States could serve as an example. If you have comments, leave them below, and I will see you next week.
Posted by Klublog at 2:21 PM No comments:

This weeks post is about my experience in the Southern Illinois Artists Open Competition and Exhibition (SIOAC). The website for this exhibition can viewed by clicking here.

I'd like to thank the judges and the staff of Cedarhurst for allowing me to compete in this exhibition. Although I didn't win, the display of work was exceptional, and I feel humbled and honored through my participation. I would include some images from the show, but I do not have any. Instead, if you are in or around Mt. Vernon, Illinois I suggest you stop in at the Cedarhusrst Center for the Arts and view the show for yourself. It's very good.

Thats it for this week. Post your comments, and I will respond.
Posted by Klublog at 9:22 AM No comments:

As you may recall, I was embroiled in a framing conundrum last week. In case you didn't read last weeks posting (which is most people) I had my work accepted in a fairly prestigious state art competition. The deadline to deliver works was this past Friday (7-31-09). My entries were of an unusual size and required special order frames. I had prepared for this; I placed my order at the beginning of July. However they weren't delivered as of last week. I went into panic mode and began looking at alternate framing methods. Last weeks posting gave a pretty good indication of my frustrations. This weeks posting is all about the aftermath. The images below illustrate the state of my studio area post-framing mode. 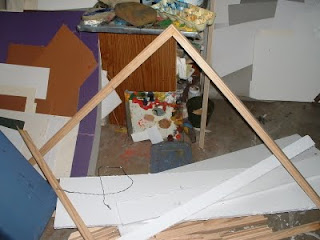 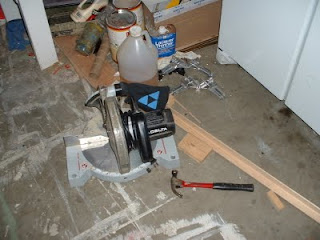 As you can see, it's quite a mess. I was working on constructing frames as soon as I got off work, around 5PM, well into the night. In the end my frames arrived Friday afternoon, and the museum hosting the competition agreed to allow me to deliver my works on Saturday. If they hadn't allowed me to do this, I'm not sure what I would have done.

All this lead me to reflect on my art school experiences. I was never taught about presentation. My classes covered techniques, styles, different types of media, and plenty of art history. However, presentation of our work was something that was never really discussed. Now, having taught art classes at two different colleges and familiarizing myself with art school curricula I have to ask; why is presentation not central to the program? As far as I know this is not taught in any art school. I think this is an interesting question. I will be researching this, and I may post what I find out. If any of you have an opinion, or are knowledgeable on this subject please leave your comments. I hope to do a follow-up on this issue in the future. See you next week.
Posted by Klublog at 12:57 PM No comments: