I am continuing to work on the Highlan' Coo painting I posted about last month. It is just about finished, and would be finished now, except for the fact that October was  an unusual month and I had some unexpected travel.  The work I have completed thus far can be seen in the following image.


Those that know me well, know that I have spent some time in Scotland. This travel left a huge impression on me, and it is my desire to travel back there one day. The Scottish influence can be seen in several pieces I have created in the past, and I have been reflecting on those images and my time in Scotland recently. This image continues the current trajectory of my work examining faces, and the character of those faces. I think it's interesting that animal faces can have as much characterization as human faces, and this particular image reflects that idea. One familiar with highland cattle can see this work and immediately respond to it. But, for those who have not seen these uniquely shaggy beasts this image could be seen as a curiosity, and that is one aspect that one feels when looking into faces. I should have it finished in a day or two.

This month I also want to highlight some of the fantastic work being produced by the students at the college in which I teach. This past week featured an annual event entitled "International Festival," which highlights different cultures and the ties Baton Rouge has to those cultures and the world at large. The art I'm sharing here was part of a display put on in the main gallery on campus. 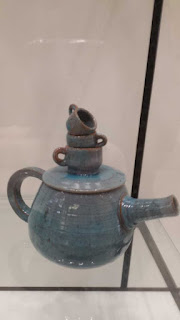 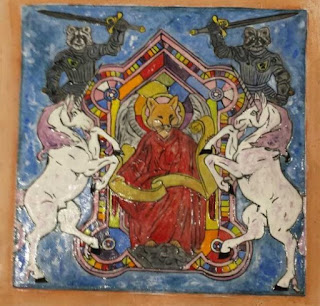 Most of the pieces are tied to a specific culture, or country. Here, I am featuring ceramics works, but there were also prints and other images as well. Incidentally, as part of the festival, the ceramics department featured an event called bowl-a-rama. Participants were invited to throw or decorate bowls to be given out as soup bowls for the needy. It's a great way to get students more involved with their community. I assisted with this, and had time to throw a bowl. It felt great to be working with clay again. I haven't had the opportunity in quite a while. I was invited to open studio on Friday afternoons, and I definitely plan on going back.
Posted by Klublog at 8:05 AM 1 comment: