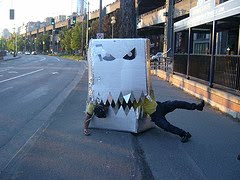 The above image is an example of public art. From the looks of things I would guess that it is also probably impromptu public art. This is art created freely and spontaneously.

Another example of this type of art was posted in the New York Observer . This story was about an abandoned area of Long Island. Artists took over and made it their own. The full story can be read here.

Spontaneous creation is good for artists and non-artists alike. I think it opens the mind and frees space from random thoughts. The creativity also offers an opportunity to grow in terms of expression. Your thoughts?

Recently an artist decided to visually depict how a Mc Donald’s hamburger and fries does not decompose. The full story can be found here. I think it is interesting that it was an artist that decided to illustrate this point, and I also think she did a nice job.

The idea was to keep a McDonald’s burger and fries, and photograph it each day. It has been six months and there has been no change in the way the food looks; no mold, no breakdown, nothing.

This was a very effective way of making the point that this food is not in any way healthy. Artists have historically documented ideas and experiments, but it has been centuries since this role has had a significant impact. The reaction from the public, as well as from the corporate offices of McDonald’s has been swift. I’m not saying artists should look for ways to anger or frustrate people, but I do think they have a responsibility to get people thinking and talking, and this project did exactly that.

Posted by Klublog at 8:52 AM No comments:

A painting by Giovanni Boldini was recently discovered in a Paris apartment. The apartment had been locked up and unoccupied for the last 70 years. The news item can be read in full here. Information about the artist can be accessed here.

This discovery has made the value of Boldini art increase. In addition, on-line searches for this artist have also risen. I think it is interesting that one painting discovered in a Paris apartment could cause such a stir. I also think it is interesting that more people have become curious about the work of Boldini. I like that an artist can create a sense of buzz about their work, years after death without much more occurring than the unlocking of a closed door.

A sample of his work can viewed below. 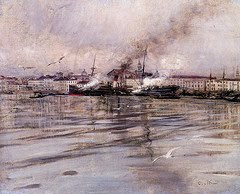 Posted by Klublog at 9:21 PM No comments: