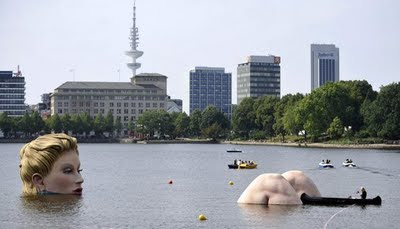 Since my last two postings had something to do with scale, I see no reason to switch topics now. A recent news item, that I found last week, described the creation of a large scale statue in Hamburg, Germany. This statue is described in the article as depicting a giant mermaid in Alster lake. This sculpture is intriguing to me, and I would really like to know how it was constructed. The coloration on it is fabulous. It is to be on display until August 12 (So if you can get to Hamburg before then, definitely do it). The full article can be read here.

This sculpture reminds me of another located in Washington, D.C. This second sculpture, called "The Awakening," depicts a giant male figure emerging from the earth. 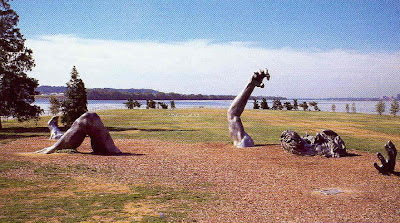 As I look at these, I am lead to wonder. What drives these artists to create large-scale figurative sculptures? Is it the lore of giants? Is it just a playfulness of scale? What about the way they are presented? One is half submerged in water, while the other is in the solid ground. Does this use of water versus land create a different context for each piece? I do enjoy looking at these sculptures, I would just like to know more about them. This is a positive reaction towards a work of art, and should probably be a goal of all artists when creating a new piece. What do you think?

The second item I wanted to post is not about scale. Rather, it is about using a tool (Google Earth) in a new and creative way. A recent NPR article profiled the work of Jenny Odell (linked here). She described her work as an examination of that which is often overlooked. She said that when the items are cut out of a satellite map, and placed adjacently to one another, they lose their individual context and a new meaning is formed that suggests fragility. The article went on to describe how it is human nature to break items down and to categorize them.

While this is true, I am fascinated by the creative use of Google Earth. I think it's great when someone can see a new and creative way of using something not intended by the inventors. Human expression takes many forms, and this is an example of building upon the ideas of others. The result is a sort of collaboration that communicates ideas in a unique way.
Posted by Klublog at 8:09 PM 1 comment: