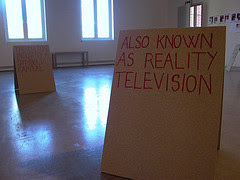 I wanted to comment on this last week, but did not get the opportunity to do so. Last week the Bravo network unveiled a new reality show. This show entitled “The Next Great Artist” has a number of people competing on a weekly basis to win $100,000 and a solo exhibition at the Brooklyn Museum. The specifics, and TV schedule can be found here.

I have to say that I don’t watch much TV, and the shows I do occasionally see are not reality-TV-based. Back when “American Idol” first premiered, and everybody went crazy over it, I was puzzled. I hated it. I couldn’t understand why anyone would tune in. At the same time I thought to myself, what if they weren’t singers but rather visual artists competing for gallery representation? Would that make it better? Would that be something I would want to try myself?

Now that someone else has come up with this idea, and actually put it into production, I can say with conviction that this is something I would not be interested in pursuing. Reality TV is far too kitschy to have any real impact. I think this true for all the reality based TV shows. Previous winners of “Project Runway” do not have influence in the fashion world, “Iron Chef” winners aren’t world class cooks, and even the winners of “American Idol” fade from the public memory. These types of programs work for entertainment purposes, but serious minded artists, chefs, singers etc. will need to travel the road from obscurity on their own.

Secondly, art is a process that develops from thought. An artist spends a good deal of time thinking. Great art is about an issue, or an idea, or some message that is trying to be communicated. This is where creativity takes shape. How the artist can best communicate his/her idea most effectively is something at the forefront of what the artist is doing.

The type of art produced for this TV show stifles creativity. Rather than focusing on the issues, these artists are going to try and figure out how to cater to the judges. It is interesting to note that the same could be said of art schools. In that environment, art students attempt to cater to their teachers. The end result in both examples is the same; mediocre art. What makes art schools more acceptable is that the creativity of art students is controlled for intellectual and developmental purposes. The same could not be said for the TV show, and I expect the level of work produced to reflect this. Please share your comments, and I’ll see you next time.
Posted by Klublog at 7:17 AM 1 comment: