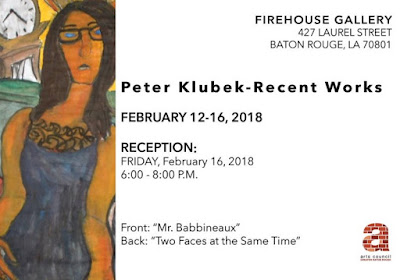 February has been crazy busy. Most of this activity has been driven by my art show at the Firehouse Gallery of the Arts Council of Greater Baton Rouge. I completely missed posting in January because I was framing, organizing images, and of course finishing up some pieces to display. Overall, the effort was worth it. The closing reception was last week, and it was very well attended. I got lots of great feedback, and some good energy going forward.

It was a lot of work putting this show together. I have not done a solo show since 2006. I began making preparations in July of last year. I had a goal of framing at least two pieces per month leading up to my show. It was a good strategy, and helped spread the cost of having to frame 15+ pieces of art. Going in to the setup, the gallery manger, Kelsey, mentioned that nobody has ever hung their show in one day.


My careful planning not only meant that my show was hung in one day, but I was done in about three hours. Kelsey was impressed and said I was the fastest show installer in the west. 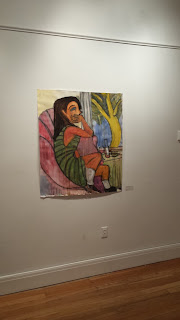 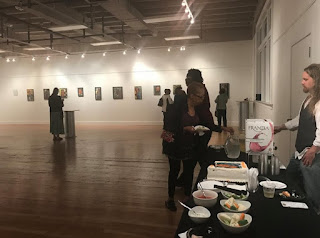 The work I chose to exhibit included a number of figurative images primarily focusing on faces. But, I also included a selection of railroad related images. The two ideas are different, and the comments I got on the two were surprising.


Most viewers responded more to the railroad images than the figurative pictures. This was somewhat surprising to me, as I think of my railroad images more as sketches than finished pieces. I chose to include them though, because the theme and title of the show was "Recent Works," which can encompass everything I have been working on, including sketches. I found myself having a few conversations with those who somehow have a connection to the railroad either through train travel, or relatives having worked on the railroad. I've always believed that trains held a special place in the American imagination, and these comments seem to back that idea up.


Before long it was time to take my show down. Taking it down was even faster than installing it. Probably the slowest part was patching the walls and painting over the patches.

It was a great show, and I have made some new contacts. Going forward I have a plan to get involved more, not only with the Arts Council of Greater Baton Rouge, but also with an artist collective located not too far from here. Keep reading this blog for future updates!

Posted by Klublog at 7:31 PM No comments: