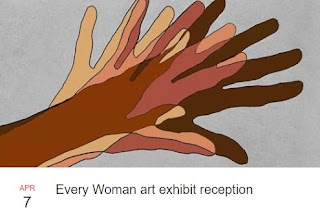 Happy April everyone! Hopefully it is spring where ever you happen to reside. It is very spring-like here is Louisiana. I was exited to be a part of the Every Woman art exhibition at Nunu's in Arnaudville, LA. The theme of the show was about, or by women artists. Most of the participating artists were women, but a few men, like myself were also invited to participate. The reception, as you can see from the poster was on April 7. But, the show itself runs through May.

The reception was well attended, for a rainy Saturday afternoon. After-all, what better way is there to spend a rainy day than to look at some art?

There were many interesting pieces. Including several items of wearable art created by Lori Henderson. And a unique sculpture by Shane Seneca.


My piece was hung next to a lovely painting by artist Janelle Hebert. I selected one of the paintings that hung in my recent solo show in Baton Rouge. This particular painting is based on an amalgamation of several librarians that I have come to know from library school on up through my career as an arts librarian. Of the images I had on hand, this one seemed the most appropriate for the theme of the show.


It was a fun reception, and I think the show is a hit. Nunu's is a great art and cultural site, and I very pleased to be a part of it. I have more news from there just below. But first an update on my most recent painting.


My most recent painting was finished at the beginning of the month.


I think I included an image of this painting while it was in progress. But, this is the finished product. It it based primarily on my Grandfather, who passed away in early November. For the next painting, I am going to step away from faces for a while. Right now it is little more than sketches. As I get further along, I will post my progress here.

The final thing that I want to mention this month, is that I have sold my first painting at Nunu's. In addition to the exhibition space featured at the beginning of this blog, the collective also has a separate space where member artists work is for sale. I have four paintings in this space, and "Mr. Babbineaux" sold!


I don't really measure an artist by how many works are sold. To me, it's more important to get the work out and seen. The feedback and the response from viewers is what I am most interested in. However, there are those that do measure the success of an artist in this way, and I haven't sold anything since I moved to Louisiana. So it's good to have hit this benchmark again.

Well, that's it for now. Come back next month to see whats new!