The issue at hand, was that over the years portion sizes in the various images have increased. The articles both explain the process of how these images were analyzed. They also both went into an explanation of how this has related to portion sizes and overeating. However, form my point of view this is another example of the ideal vs. the real.

Many of the paintings analyzed were created hundreds of years ago. The food making process has changed considerably since then, and therefore the ideal of what food should look like has also changed. I think that this issue is less about portion size, and more about what the ideal food should look like.
Posted by Klublog at 11:34 AM No comments:

Email ThisBlogThis!Share to TwitterShare to FacebookShare to Pinterest
Labels: Paintings

Art, reality, and a little on Toyota

The post for this week is structured around the ideas of reality and art. I have long been a fan of Plato's take on reality and art, and I will explain his philosophy on this issue again, if you are unfamiliar with it. The topic for this week was inspired by Toyota's bad luck of late, and a news report filed by ABC News. To read that report in full, click here.

The ABC News report was about the braking issues that Toyota is experiencing. A professor at Southern Illinois University (GO SIU!) reported to a congressional hearing on the braking issue, and how he re-created some of these problems in the lab. The tachometer that monitored the revving engine was filmed twice. Once during the actual on-the-road test, and then again in a stationary position on blocks. The second filming, when the car was on blocks, was easier to see. The vibrations of the car made visibility in the on-the-road test difficult. Since the footage of the test on blocks was easier to see, this was what was used in the final report. Toyota has taken issue with this presentation, and said the conditions of each test would produce different tachometer readings. 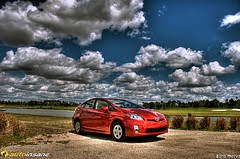 To me this all relates to reality, and how reality is depicted. I said I would relay the thoughts of Plato and reality, but in the in the interests of keeping this blog entry at a reasonable length, I will refer you here. What does all of this have to do with art? Art is reflection of reality. Even if the theme of the work is fantasy, that idea is based on some reality or another. Additionally the issue with ABC News was based on an aesthetic decision. Reality in art, and more widely in aesthetics, is based on decisions made by individuals. How those individuals are communicating their vision of reality is the real issue. Post your comments, and I'll see you next time. 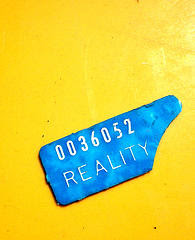 Posted by Klublog at 5:43 AM No comments:

The topics (There are two! It's a two for one deal.) this week were sent to me by a friend. One discussed art produced on skateboards, and the other examined the work of Theodore Geisel AKA Dr. Seuss.

The article on skateboard art can be read here.
As I read this, I was not so critical on the artists descicion to paint an image on skateboards (as the argument of the article seems to describe) rather, I was more interested in why he chose skateboards. As I have often posted here, I firmly belive art is a tool meant for communication. The idea being expressed should be a part of all elements within the work. When I was in art school an artist and fellow student decided to produce his imagry on televisions, suitcases, hatboxes, and various other objects rather than paper or canvas. The image painted on thses items somehow related to what that object was. The result was a complete work where all aspects of visual information applied. I'm less certain of why this artist is painting on skateboards. It seems like he is only interested in making money. If that was his intenion, then I agree with the argument of the article. My reasons for agreement however, are quite different. 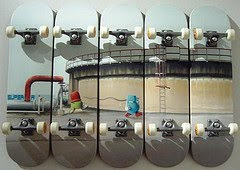 The second topic came from another blog. The full story can be read here. This discussion expressed surprise at learning about some politicized imagery produced by "Dr. Seuss." I have to say that I am not surprised. That time period (WWII years) was very politicized for all artists. I've seen similar works produced by Charles M. Schultz from that time period. What would have surprised me would have been to learn that this type of cartoon was produced well afet the war years in private. This is not the case however. 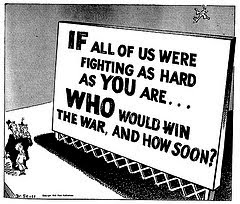 Thats all for this week. Leave your comments, and I will respond. See you next time.
Posted by Klublog at 11:07 AM No comments: